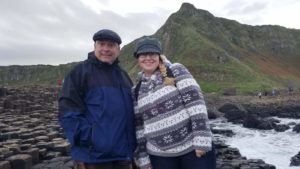 Disclosure “As an Amazon Associate I earn from qualifying purchases made through the links below or I may earn money or products from the companies mentioned in this post. 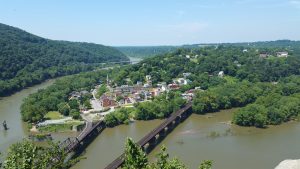 At the end of June which happened to be one of the hottest weekend this summer we traveled to West Virginia to Harpers Ferry.

What is Harpers Ferry?

Harpers Ferry is a small town in West Virginia that is also a national park. Only the lower town is part of the National Park system and the rest of the town is considered an historic district. As shown in the picture taken form Maryland heights outlook in Maryland, Harpers Ferry is in between the Potomac and the Shenandoah Rivers.

This is also where three state met; Maryland, Virginia and West Virginia. It is a national park and best known because of it’s importance in the civil war. In 1859 John Brown raided the armory in the town.

Thomas Jefferson October 25, 1783 visits while passing through to Philadelphia. He views the Potomac from a rock that is now named the Jefferson Rock. He is quoted to have said  “This scene is worth a voyage across the Atlantic.”

A side note is that the rock is unstable and dangerous to stand on and the National Park Service has a sign posted not to climb or stand on the rock and per the national park service website it is prohibited.

Please note the following regarding your safety and the protection of Jefferson Rock as a cultural resource:

To my dismay, one couple blatantly violated this rule, being disrespectful tourist. The first picture on the left shows the sign saying that climbing on and standing on the rock is not allowed and is dangerous. The picture next to it shows the couple who disregarded this sign and the rules. I was a distance away when taking this picture but you can see the man on the top taking a picture and the woman also right up there also. 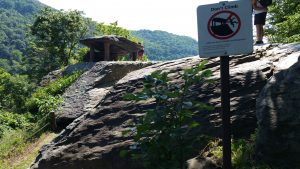 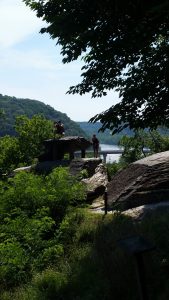 This is how Jefferson Rock is supposed to be experienced. From below and by following the rules to not climb on the rock which has had to be reinforced over the years. 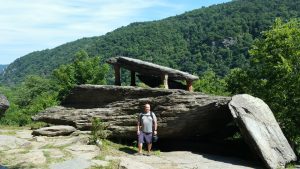 George Washington– He proposed that Harpers Ferry be the sight for a new US armory and arsenal. in 1796 land was purchased and construction began in 1799.

John Brown Raid– October 16 1859, abolitionist led a group in a raid on the arsenal. Brown intended on capturing the weapons to start a slave uprising throughout the south. The residents in nearby Charles town were alerted to the situation and forced Brown and his men into an engine house adjacent to the armory. He was tried for treason in Charles town but his raid caught the attention of others.

Civil War-  Harpers Ferry located on the railroad at the northern end of the Shenandoah Valley, had both Union and Confederate troops that frequented it. It changed hands 8 times in 4 years, between 1861 to 1865. For those interested in Civil War battles and history they will find this place very interesting The Battle of Harpers Ferry and Battle of Antietam both occurred close by. On the Maryland Heights trail there is an information board about when the confederate army marched on the mountain to surround the town. You can walk the trail yourself, which leads to a great overlook of the town and rivers below.

What to do in Harpers Ferry

Hike the Maryland Heights trail:
This trail starts from Harpers Ferry Street across from the town. There is a little bit of parking on the side of the road but this was full before 9 am on the Saturday we were there. There is also a little parking in the lower town  near the train station but on busy days you will want to park at the Visitor Center and take the shuttle down to the lower town. It cost $1o to park and the shuttles run until 6:30 in the summer. From The shuttle drop off just walk straight through town over to the walking bridge that runs along the rail road tracks over the river. Then walk to the left down the C&O Canal Towpath until you come to another much tinier bridge to get up to the street where the small pull off parking is near the trail head.
The trail has two options. Both start at the street, the shorter option being about 4.5 miles to the outlook  and back according to the NPS and 6.5 miles to take the longer trail after the outlook to the Stone Fort. It is steep at some points, has a decent amount of shade and takes about 2-3 hours to do round trip.
On a nice day, we were there when it was in the high 90’s  and humid and there was still a lot of people, you will not be alone on the trail. After ascending upwards for about 2 miles you will finally come to some switch backs that lead down hill to the outlook. Once at the outlook it is time to climb down some step rocks and find a place to enjoy the view in between the people. 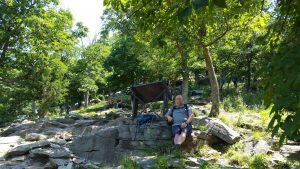 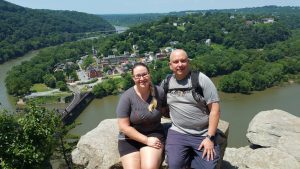 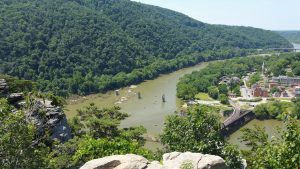 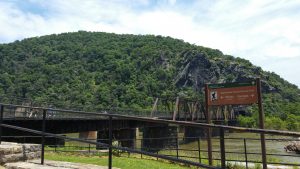 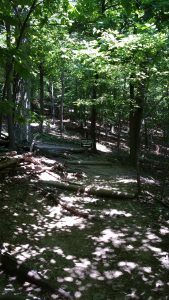 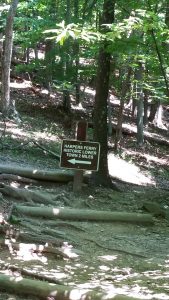 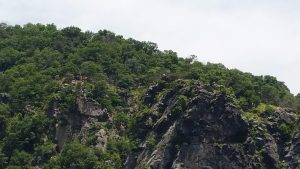 My Favorite things in the Lower Town

My favorite was the old time candy store- Cool Confectionaries
We bought the 1700’s candy package with 10 candies that were made in the 1700’s. 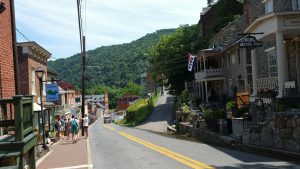 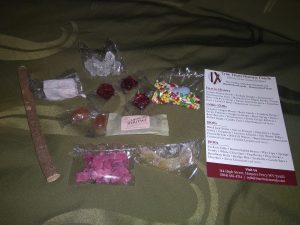 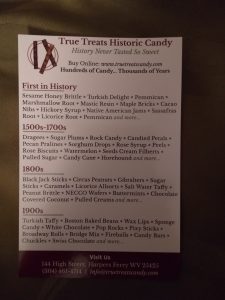 There are also a bunch of cute shops like

The Village Shop at Harpers Ferry

There is also a section of the old town that has an old Dry Goods shops, an old men’s clothing store and old houses with information about who used to live there and about how the town was laid out. To get to Jefferson’s rock you have to climb up some steep and a bit slippery steps past an old church and then continue past the church to the rock. From there you can keep going to another old house and even on to the Appalachian Trail Conservatory.

There are a few different companies that do River tubing, kayaking and other activities. We did a 4-5 hour guided whitewater tubing trip on the Antietam Creek which included the transportation to the creek and back and lunch through River and Trail. They also do regular white water rafting, tubing on the Potomac and Shenandoah, kayaking, zip lining and riverside camping.

We choose the whitewater tubing and really enjoyed it. We were met by one of the guides at the parking lot and everyone loaded into the buses to be transported to the river. Once at the river we received our life vest and picked up our tubes. There were 3 guides in canoes who not only guided us along the river but carried the food and set up the picnic lunch. I enjoyed this tubing experience. The rapids were considered class 1 so they were not too much for the tubes. The Antietam Creek is windy so there are points where you can’t see what is coming around the next turn, so having the guides let us know when we needed to stay to the left or to the right really helped. It was important to pay attention while floating on you tube to not hit some of the rocks and trees in the creeks. We had an enjoyable experience and would recommend to go tubing one of the rivers or creeks on a hot day like we did. 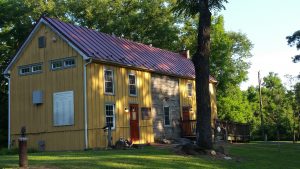 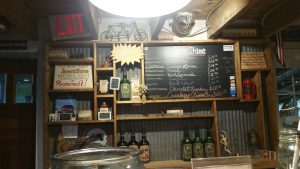 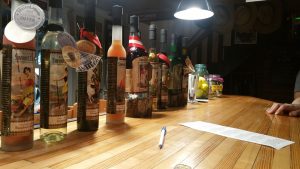 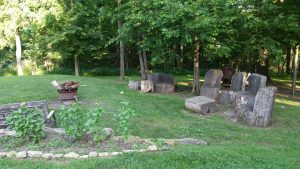 The Bloomery Distillery in Charlestown, WV is not far from Harpers Ferry. It was interesting because the Distillery is located down a long gravel driveway. At the end of the drive way is a restored yellow barn where they hold the free tastings, have the bar and local music on Friday and Saturday nights. There is an outside bar section where the music is  and an area that looked like they use it for campfires.

When we arrived on Friday night it was not too crowed. We enjoyed our tasting with 4 other people and learned a lot about the distillery. We ended buying the Ginger, Saffron Rose and the Black Walnut flavors. They each came with drink recipes cards for each flavor and some flavors can be bought in a few select states.

Other things to do that we didn’t do

There are quite a few things to do in and near Harpers Ferry, WV. For those interested int he Civil War or History in general they will find Harpers Ferry National Park and the John Brown Wax Museum interesting. For those who like to shop and eat, there are some cute shops in the Lower town of Harpers Ferry. There is also a lot of outdoor activities to do such as kayaking, tubing, rafting, hiking, zip lining, tree course and camping. Really there is something for everyone in the family to make it an enjoyable trip.
(Visited 654 times, 1 visits today)